5 Minutes with a Wildlife Conservationist

5 Minutes with a Wildlife Conservationist

Every year, Taronga sends its staff to assist other conservation organisations around Australia and internationally as part of its Zoo Friends Fellowship Program. From vet staff and carpenters to IT personnel and marketing experts, our fellows come from all areas of our organisation. Recently, IT project manager Niki Pollock and guest experience officer Danielle Dendrinos ventured into the field with the team from Science for Wildlife (SFW) to assist with their Blue Mountains Koala Project.

During their trip, Niki and Danielle chatted with SFW executive director Dr Kellie Leigh about why her team is tracking koalas and what surprising things they’ve discovered about populations in the Blue Mountains area.

Kellie’s role sees her involved in all aspects of SFW’s work, from developing new projects and grant writing and fundraising, through to fieldwork, genetics, DNA testing and disease investigation. Her research expertise is focused on the application of science to conservation challenges and includes conservation biology, genetics, behavioural ecology, and recent work training and evaluating wildlife detection dogs.

What’s the Blue Mountains Koala Project all about?

KL: It is our flagship project at Science for Wildlife. We’re an Australian registered charity. Relatively young and innovative, we’re quite small at the moment, but we’ve got a lot of exciting work underway. I guess our point of difference between a lot of other not-for-profits and research organisations is that we try to bring together research with community involvement and participation, and we work with land managers. That helps us to ensure that the research gets used on the ground, and efforts are sustainable. So that’s an integral part of all our projects.

What are the key focus areas for your teams in the field?

The focus of our work in the Blue Mountains is collecting a whole range of data. Nothing is known about koalas at all in this area. They’ve never been surveyed. So it was a big knowledge gap, there are a lot of known issues with koalas being on land that has good soils and where a lot of development goes on – but it’s been presumed that they are found less in protected areas, especially in sandstone dominated country, and we don’t know anything about these populations.

But we’ve got some really exciting results coming in. Basically, everywhere we’re looking in the mountains we’re finding them, they’re popping up in new places all the time, and it could be a really important refuge population and a source population into the future as we’re faced with climate change. We’re getting out there, collecting data on everything: the habitats they use, the food trees they use, mortality rates, breeding rates, genetics and disease testing as well.

And what’s the most interesting thing you’ve discovered about Koalas in the Blue Mountains?

KL: We’ve just finished a genomics project, with James Cook University, Sydney University and San Diego Zoo Global. We found that the Blue Mountains koalas have the highest genetic diversity of any populations in the country. We sampled 21 populations from Adelaide up to far-north Queensland. So that’s really exciting, but it only includes a relatively small number of samples from the Hawkesbury to lower Blue Mountains area so it’s only the beginning of an interesting story.

What are some of your future project goals?

KL: The Blue Mountains World Heritage Area is 1 million hectares so we’re not trying to cover all of it, but we’ve got five sites identified as representative sites. We need to do that because the habitats are so different. We’re covering from 30m in altitude to up to 1100m at the moment. The sites have totally different micro-climates, different habitats and soil types. The World Heritage Area has an outstanding diversity of eucalypt species so the koalas here have more choice than anywhere else. By working out what koalas use in these areas it’ll tell us a lot about their ecology and why they choose certain habitats and not others, and also how big and how viable this population is and what the threats are.

Do you work with local communities to achieve your objectives?

KL: That’s a really important aim of our organisation. Approximately 80 per cent of our data is actually collected via community members. We run a lot of volunteering. We do everything from general media and awareness and encouraging people to report koala sightings to us, to running workshops and lectures and talks for community groups. People can come out koala spotting to help us find koalas, and if they’re really keen and fairly competent bushwalkers (because we cover some steep terrain), they can come and train up to radio-track koalas with us and collect the data that is a core part of our research program.

What does a regular day at work look like for you?

KL: One of the things I love about my job is that there is no regular day at work at all. I can be desk-bound for quite a while writing reports and papers, and then I can get in the field for a good long stint, which is really important I think if you’re in the wildlife conservation field – you need to get out and remember why you’re doing it. For me, that’s my restart and my refresh, to get back out there into the bush. 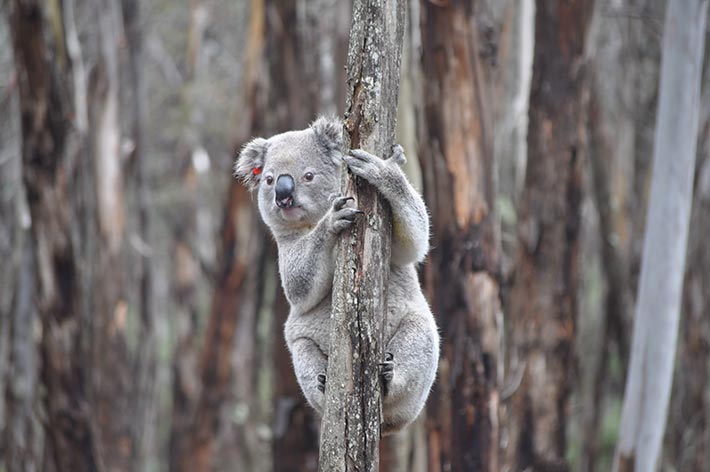