Every two years, Taronga extends its reach by awarding funding to other organisations and conservation projects around the world. Since launching the Field Conservation Grants in 2008, Taronga has provided funding and staff support to 70 vital programs. Projects that have benefited from a Taronga Field Conservation Grant have helped to regenerate habitats, mitigate human-wildlife conflict, reduce poaching and trafficking and create opportunities for people and wildlife to live side by side.

Primate species across Africa are decreasing due to the destruction of tropical forests and illegal wildlife trade. Gnanhouizoun Community Forest in Southern Benin is a mosaic of dense forests, gallery forests and swamps, and is one of the last refuges for the critically endangered Red-bellied Guenon (pictured below) and the threatened Olive Colobus. Other threatened species in this area include the Red River Hog, Sitatunga, Western Tree Hyrax, White-bellied Pangolin, Large-spotted Genet and Spotted-necked Otter. 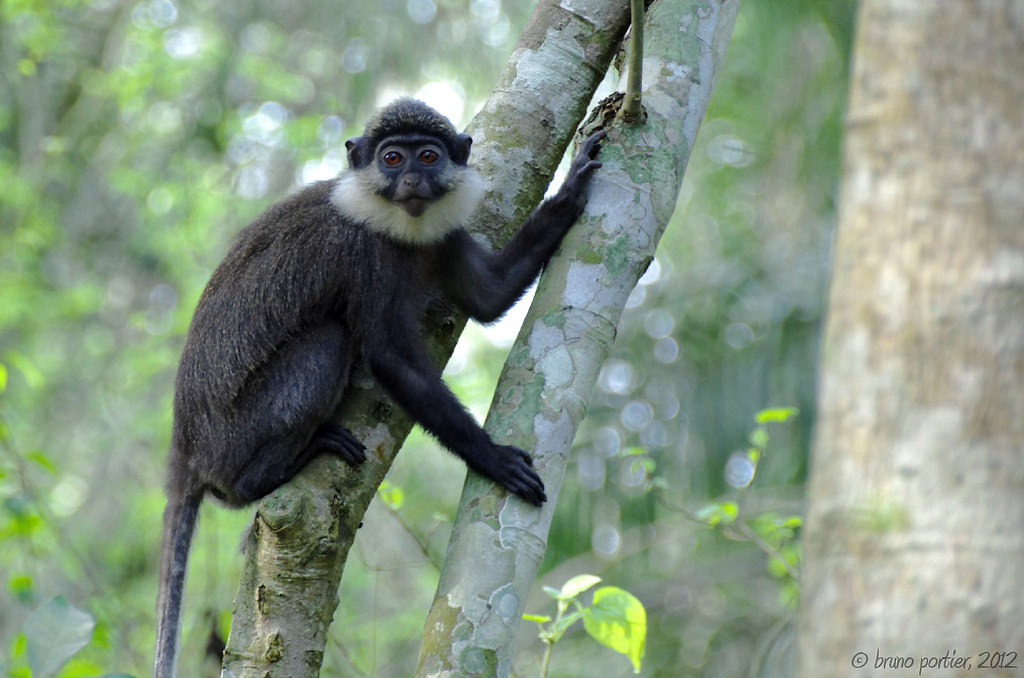 The Organisation for Sustainable Development and Biodiversity (ODDB) is a non-government organisation working within the forest to identify the abundance of threatened species and reduce the pressures they are facing. ODDB is also working with the local community to protect wildlife in the area.

With the support of Taronga’s Field Grant Program, ODDB has been working towards several of its conservation goals:

Cameras were set up randomly in the forest. Photos and video footage was recorded of 13 mammal species, nine bird species and one reptile species to date. Two bird species and a nocturnal rodent were recorded but could not be identified.

Re-directing hunters away from the bush-meat trade and towards alternative agricultural sources of livelihood.

To reduce the incidence of poaching in the forest, ODDB aims to provide 10 villagers previously known to hunt bush-meat in the forest with an alternative income. These villagers are being trained in the farming of the African Giant Snail.

Establishing plantations of fast growing trees for fuel-wood needs in the villages surrounding the forest.

To reduce deforestation within the Gnanhouizounme Forest by local villagers for charcoal production, ODDB is setting up plantations to grow trees for this use. So far, 15 people from the five hamlets of Gnanhouizounmè village have been trained to operate and manage a community-led nursery. Every hamlet was provided with the required material to operate a nursery – such as rakes, shovels, wheelbarrows and seeds. Five nurseries are currently operating in the village.

Promoting clean cooking stove use in Gnanhouizounmè and surrounding villages.

Clean cooking stoves are constructed to provide a safer method of cooking than the traditional open fire. By creating the closed fire stoves, the need for charcoal is also greatly reduced as it takes longer for the charcoal to burn, meaning that less trees are needed to charcoal production.

So far, 19 instructors from the five hamlets of Gnanhouizounmè village have been trained on how to construct and use clean cooking stoves. Delegates from every hamlet then organised a meeting in their hamlet to share their knowledge with the other women. The delegates of every hamlet were also provided with materials necessary to construct clean cooking stoves such as moulds, hoes, machetes and planks.