A tiny, short-beaked echidna puggle found alone and abandoned on a property in Weja, NSW, is being hand-raised at Sydney’s Taronga Wildlife Hospital.

Taronga Veterinary Nurse Liz McConnell has become the puggle’s dedicated surrogate mum. She takes the little echidna home at night and to work each morning in a makeshift burrow, fashioned from a climate-controlled esky.

“A puggle of this age would normally be in a burrow where it is relatively cool, probably no more than 23 degrees,” says Liz. The esky is equipped with a thermometer and filled with dirt, leaf litter and soft towels, making it a safe and cosy temporary home for the echidna, nicknamed ‘Weja’ after its place of origin. 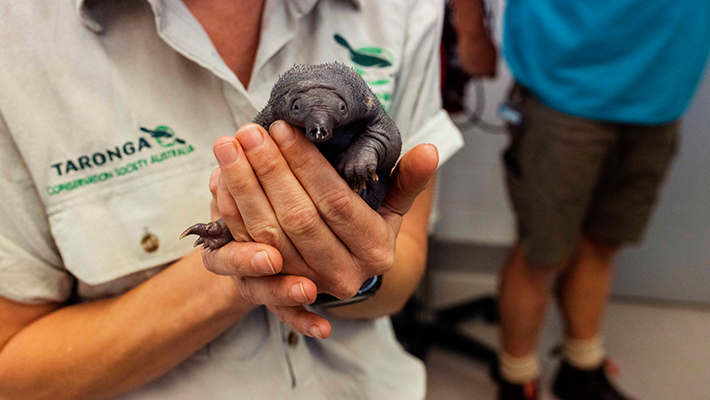 “I feel incredibly lucky and privileged to be handraising this short-beaked echidna,” says Liz. “I have hand-raised other Australian natives, but this is the first echidna. These animals are so unique and it’s a real learning experience. Other nurses and vets on the team that have raised short-beaked echidna puggles in the past, and they are there if I have any questions. But so far it’s going really well and I’m thoroughly enjoying the process.”

When Weja arrived at the Taronga Wildlife Hospital three weeks ago, its eyes weren’t fully opened, and its ears were closed. It received a full health assessment, including a vet check and x-rays, and was found to be relatively healthy, with just a few scabs on its tail.

By studying its body length measurements, Liz estimates Weja is now around 70 days old. “We don’t know the sex of the puggle at the moment. It’s very hard to tell with echidnas at this age,” says Liz. 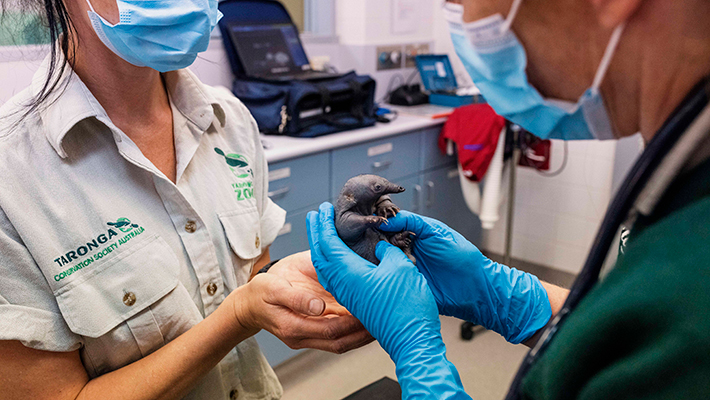 Ensuring the little echidna receives adequate nourishment is a high priority for Liz, who checks and weighs the puggle every day. Now weighing in at 280g, Weja is feed every second day – when it first arrived it received twice-daily feeds, and soon it will graduate to being fed every three days.

Weja’s diet is composed of a specially formulated milk powder mixed with pre-boiled water. The type of milk formula fed to orphaned puggles depends on their age; Weja will soon transition to a different formula with a higher fat content.

“Echidnas at this developmental stage will be left in their burrow by their mother for up to 10 days. When she returns, the puggle will have a big feed and can take in up to 40 per cent of its body weight in that one feed,” she says. Mother echidnas don’t have nipples or teats and secrete milk out of the pores of their skin. In order to mimic an echidna’s nature feeding style, Liz dribbles milk onto her hand for Weja to lap up, just as it would lick milk from its mother’s abdomen.

This lucky puggle will have Liz caring for it until it is ready to be weaned, at around seven months old. It will then stay at the Taronga Wildlife Hospital until it can go home to Weja.

“At Taronga Wildlife Hospital, the ultimate goal with any wildlife case is to treat, rehabilitate and release the animal. This puggle came in as an orphan with minimal injuries, so our plan is to rehabilitate it to a point where it can be released back to the area it was found when it reaches a suitable age and at a suitable time of year,” Liz says.

Taronga’s two Wildlife Hospitals in Sydney and Dubbo provide vital emergency assistance to sick and injured animals from the wild. Each year, we see native animals like Marine Turtles, Koalas, Platypus and many others coming through our doors.

With your help we can provide Australian wildlife with the best possible care. Donate online today: www.taronga.org.au/donate/wildlife-hospitals